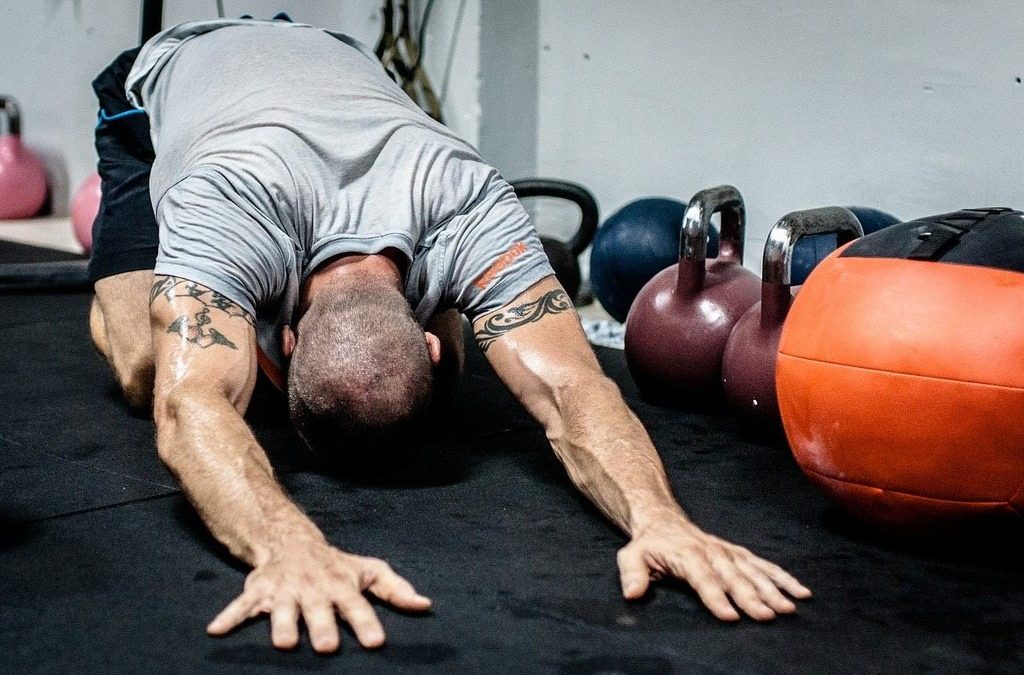 Part of being a good critical thinker is being able to adjust your opinion as evidence changes. And I’d have no business writing these articles if I didn’t practice what I preach! This is a look at the changing evidence on when and how to stretch, and how this effects our injury risk. My opinion has changed as the evidence changes on stretching and injury. Here we explain how.

Here’s a challenge for you: get 100 personal trainers, put them in a room, lock the door, and tell them they can’t come out until they agree on all the fundamental principles of exercise programming. They’ll probably never come out.

There will always be someone with a different opinion! And trainers work independently of each other, so normally they won’t notice this. In fact, trainers will probably assume that most good trainers think the way they do. In reality, many trainers hold unscientific views that are at odds with rest of the industry, and are informed by unreliable sources of information.

But most of these arguments occur on the fringes. Some little detail about training or nutrition might change, and this won’t affect most people.

How and why do we stretch?

This one might affect you though. It turns out what we know about stretching is changing. This provides a fascinating opportunity for us to look at how this changing evidence influences our opinion.

We start by looking at static stretching. This is when muscles are held in an elongated position for a period of time, in order to improve mobility around a joint. Most of us do this, either before or after exercise. In fact, for years this was standard advice for exercisers, either on its own, or as part of a larger progressive warm up. 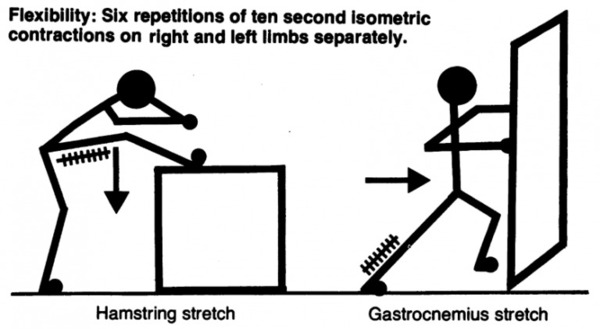 Clement and Taunton were on the right track when they also identified strength, and habituation to training loads, as keys to preventing injuries. But the notion that static stretching will reduce injury rates was not supported by evidence. In fact, it was contradicted by quite a lot of later evidence!

Two Australian studies (in 1998, and 2000) used Army recruits as guinea pigs during 12 weeks of training. In each study participants were divided in to two groups: one did a dynamic warm up only before exercise. The other did lower body static stretching as well. Neither study found a difference in injury rates between the groups. 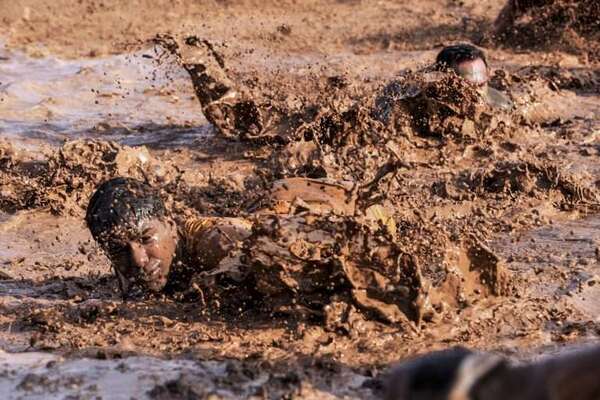 Around this time there were at least two systematic reviews into the topic. A systematic review is when research databases are searched in a methodical way that can be replicated by others, and so potentially useful information is not missed. Conclusions are then made based on the whole body of this research, not just one or two studies.

And what did they find? No change in injury rates with static stretching.

If stretching doesn’t reduce injury, then what does?

A key factor is muscle fatigue. For example: a study conducted on rabbits showed that fatigued muscles were able to absorb less force, and stretch less, before tearing… but before anyone complains about why we are applying an animal study to humans, consider the ethical issues of trying to do a similar study on people!

So how do we reduce fatigue? By being fitter.

A number of studies (including this one by the team here at Critical Fitness) have shown that increased fitness is associated with reduced injuries (both acute and overuse injuries). Everything else being equal, a more trained muscle is capable of absorbing more force, for longer. One that is less trained will fatigue, and tear, sooner.

So what do we recommend as a warm up instead? Most professionals recommend a dynamic warm up routine, with little, if any, static stretching.

Start with a light, fairly general activity (like a jog, bike, or row). Then add dynamic movements increasing in range, speed, weight lifted, etc., that start to mimic the activity you are preparing for. 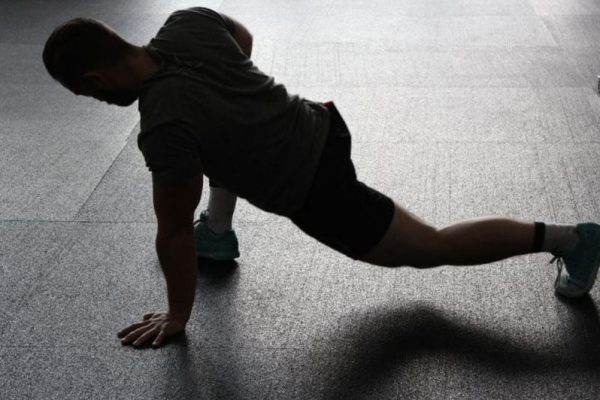 Static stretching – not as important at reducing injuries as we used to think.

Not only did static stretching not seem to reduce injury rate, there are other reasons we preferred a purely dynamic warm up.

As a result of all this research, what personal trainers have been taught, and what they practice, began to change.

I say slowly, because PTs are rarely at the forefront of scientific research. It take time for these findings to filter down from research articles into textbooks, then into the practice of professionals, and then into the fitness course syllabus and practices of new graduates.

According to research soon to be published, 37% of personal trainers agree that static stretching reduces injury risk, while only 16% of degree qualified exercise professionals agree. And the overwhelming majority agree that a progressive increase in exercise intensity is a good way to warm up. 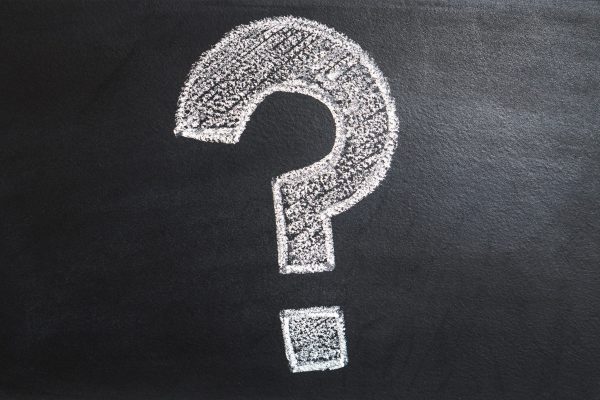 The popular opinion isn’t necessarily the right one, but the opinions of personal trainers are in line with the evidence on this one

Of course, it’s possible to include a static stretch in a dynamic warm up, but it seems that the majority of exercise professionals don’t do this.

Practice what you preach

My own practice reflected this evidence. Partly this was because of the evidence we covered above. But also because my personal preference was not to stretch. In other words, the evidence fit my bias. I didn’t like stretching, and felt I could perform well without it, so was happy doing a dynamic warm up in my own sport and exercise.

How do I respond if the evidence changes? My bias will be challenged! So I need to make sure I interpret new evidence fairly.

More recent systematic reviews suggest that the risk of acute muscle strains during exercise may be reduced with static stretching combined with a dynamic warm up, though overuse injuries are not. 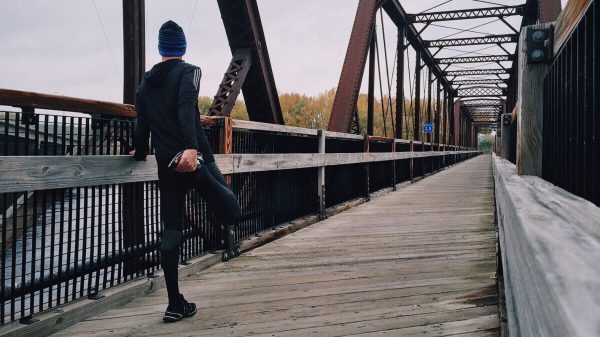 Changing evidence may lead to changing opinions… maybe there’s a place for stretching after all?

So clearly this doesn’t change everything. But our opinion can evolve as the evidence does. One of the key recommendations of the recent research was that more research is needed.

But the effect of static stretching on performance is pretty clear. If you need to perform well, skip it. But you might need to accept a slightly greater injury risk!

The reduced injury risk we see with static stretching only applies to acute strains so far, not overuse injuries. In my professional experience, acute muscle strains are overwhelmingly sports injuries. If you get hurt exercising in a gym, or with your trainer, it’s much more likely to be an overuse injury.

So can you static stretch when training in the gym for health and general fitness? Absolutely! It’s not doing any harm.

Is a static stretch going to help? Maybe, in very specific circumstances. But probably not for the majority of gym goers.

How has my professional practice changed? It hasn’t yet. This is very much a “watch this space” situation.

But my opinion has changed. I’m more open to someone performing a static stretch as part of a progressive warm up if they want to. When teaching, I’m also happy to let students include a static stretch when designing programs for a client, provided they have clear reasons.

If the evidence changes further, I will need to consider my opinions again. No opinions are that precious that they cannot be challenged by new information…

Unless you’re an anti-vaxxer… you’re picking evidence that suits your opinion anyway, so no one cares what you think. 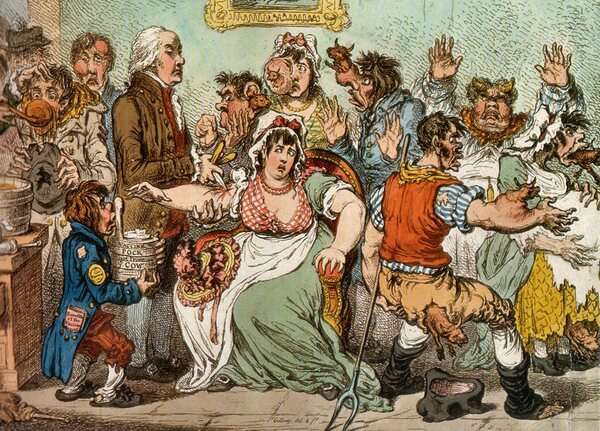 Anti-vaccination evidence hasn’t progressed far since 1802, when this cartoon was first published. Let’s makes sure our opinion reflects the evidence.

So you want to get big... what sources of information should you use? →